Gong cha” means to offer the best tea to the Emperor from all possessions. It represents the highest quality and self-expectation. 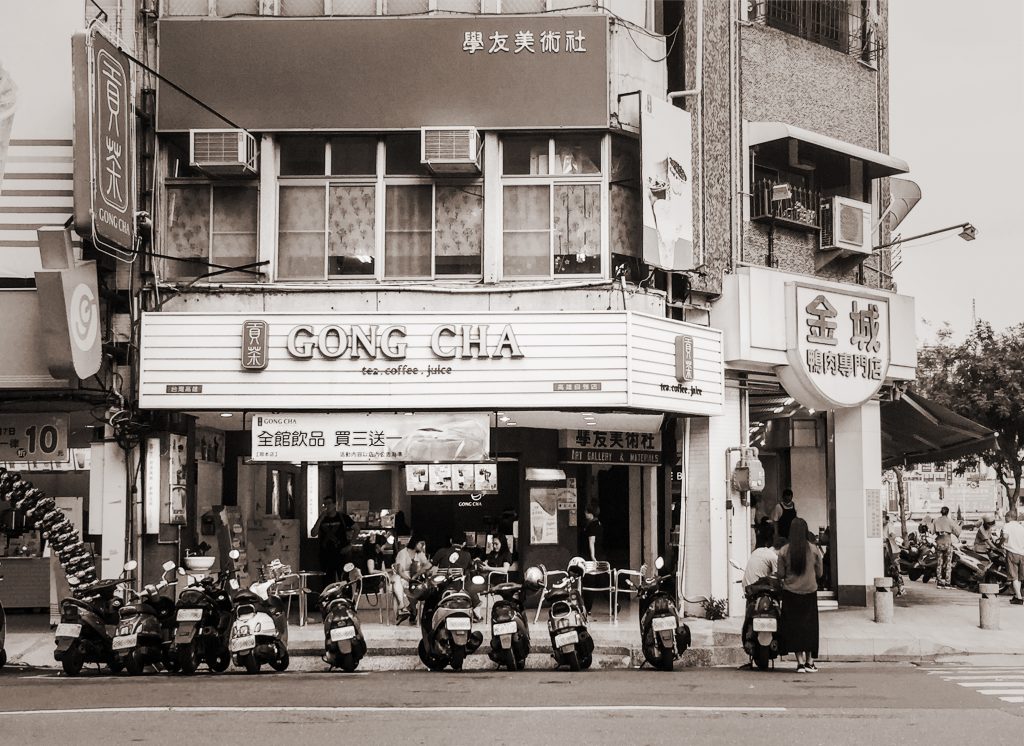 Established in 2006, Gong cha has been appreciated by its customers, relying on good words of mouth and unique customized services originated in Taiwan.From then on, the story of Gong cha has widely spread, and Gong cha has become one of the best-known quality tea providers in the world. Nowadays, Gong cha has blossomed in more than 20 regions.

In 1996, a man named Wu opened a premium tea shop in Taiwan. The reputation of the shop grew and it wasn’t long until there were customers lining up to purchase Wu’s tea. To meet the demand, Wu decided to expand, standardizing his recipes to ensure that all stores served consistently good tea.

Wu worked hard to develop his own tea blends, testing everything 23,000 times to perfect his recipes and ensure he could guarantee the same high quality at every single shop. He patented his milk foam formula and, in 2006, Wu established Gong cha in Kaohsiung, Taiwan.

The new tea brand inherited the quality and commitment of the original shop, but with the new Gong cha commitment to serve tea fit for a king, literally — Gong cha refers to the act of offering tea to the emperor as a form of tribute in ancient China. The brand name represents Wu’s philosophy that tea served at Gong cha will be made with the highest craftsmanship and the knowledge of a tea master.

Gong cha’s success wasn’t thanks to a slick advertising campaign or a polished business strategy. Instead, the tea shop chain did things the old-fashioned way — letting its high-quality drinks speak for themselves and relying on word-of-mouth to grow the brand.

Gong cha made its first foray overseas in 2009, when it expanded to Hong Kong in a bid to build on the popularity of the brand with tourists visiting Taiwan. The popularity continued to grow and the brand quickly spread around Asia, starting with the Philippines.

In 2011, Mr. and Mrs. Martin Berry fell in love with the brand after visiting a store in Singapore, and flew to Taiwan to discuss ways to bring Gong cha to the Korean market. Once the brand arrived in Korea, things really took off. In just three years, Gong cha spread from a single store in Hongdae to 250 locations nationwide, with customers clamoring for more from the popular tea brand.

After Korea, Gong cha’s global expansion spread outside of Asia. Branches in Australia, the United States, Mexico, Canada and the United Kingdom opened over the following years, as well as a rapidly expanding operation in Japan. Gong cha Japan set a sales record of more than 3,000 cups a day when it opened, with Gong cha Vietnam going on to hit 4,000 cups a day.

Just as Gong cha Hong Kong prompted the Asian expansion and Gong cha Korea pushed things further, the success of Gong cha Japan caught the attention of Cristina, who carried the brand to Central and South America with the establishment of Gong cha Mexico. With each new step Gong cha takes, the brand gains the momentum to spread further afield, taking its refined taste and quality all around the globe.

In the midst of this massive global expansion, Gong cha opened its global headquarters in London in 2020, laying the groundwork for the establishment of an active, central globalization strategy. Gong cha now operates 1,600 stores around the world, and has continued to expand despite the Covid-19 pandemic. The quality of Gong cha’s product, the reputation of the brand, its knowledge base, strong franchise system and professional headquarters have allowed it to weather the pandemic without any serious negative impact.

Gong cha Taiwan still adheres to that commitment to taste and quality that Wu first established in his tea shop nearly 30 years ago, carrying that vision through to the supervision and support of all current production and management of raw materials and techniques. Gong cha Korea, now home to the brand’s largest market, continues to develop and innovate at the cutting edge of the brand’s franchise system and globalization strategy.

At the heart of the entire business, from Taiwan – Seoul – Asia – Americas – Europe – and more, Gong cha tea is always made with the correct amount of water and tea leaves, brewed at the right temperature and for the right amount of time and served with only the very best pearls and toppings.

Gong cha uses only loose-leaf tea, no bags or powders, and ensures that all drinks are served at their freshest by making all tea and pearls fresh in store with just a four-hour shelf life. This commitment to excellence ensures that Gong cha is always Brewing happiness.